I participated in an interview regarding my Sacred Art Series with Dr. Hanael Bianchi, a blogger at the Archdiocese of Washington's The Catholic Review. Check it out!

Here's a brief sample from the interview:


2) What inspired you to start the series?
A confluence of several things: First, My day job is as an assistant attorney general for the Michigan Attorney General. In this capacity, in the summer of 2013, I was assigned to the team of attorneys working to preserve the art collection of the Detroit Institute of Arts during the Detroit Bankruptcy. To my shame, I realized that I had not been to the DIA since I was a kid. Later in 2013, I rectified this and again toured the museum. I was thrilled to discover their beautiful medieval and Renaissance art, which includes pieces from Caravaggio, Bartolome Esteban Murillo, Gerard David, and even Fra Angelico.
Second, I had a conversation with my oldest niece, 8 and an avid reader, and I learned that she had already completed the Hobbit and the Narnia Chronicles and was already beginning The Lord of the Rings. This is all great; but I asked her whether she'd read the Gospels, and she had not. This got me thinking: is there a version of the Gospels that is suitable for a child? And as I began to look around, to my surprise, I realized that there was not.
Third, my wife and I received a set of old McGuffey readers from my wife's parents. We began using these with my son and I soon realized that I liked the way the books were laid out. The early books in the set--for beginning readers--used larger print and often included pictures. Gradually, as the series continued--and presumably, as the young reader's abilities developed--the books used smaller type and included more words per page. This seemed to be a winning formula.
Fourth, prayer. Not long before these discrete ideas began jostling around in my head, I attended an excellent Ignatian retreat with the religious order Miles Christi. My resolution from the retreat was a disciplined prayer life, which included regular recitation of the Rosary as I drove to and from work. One day, as I prayed, the idea formed: a book of the Gospels in a story-by-story format with large type and beautiful images of sacred art. And I was pretty sure that all that I needed was already in the public domain, and that I could self-publish using Createspace or some other print-on-demand publisher. Later, I determined to make the book truly beautiful by using a professional book printer. 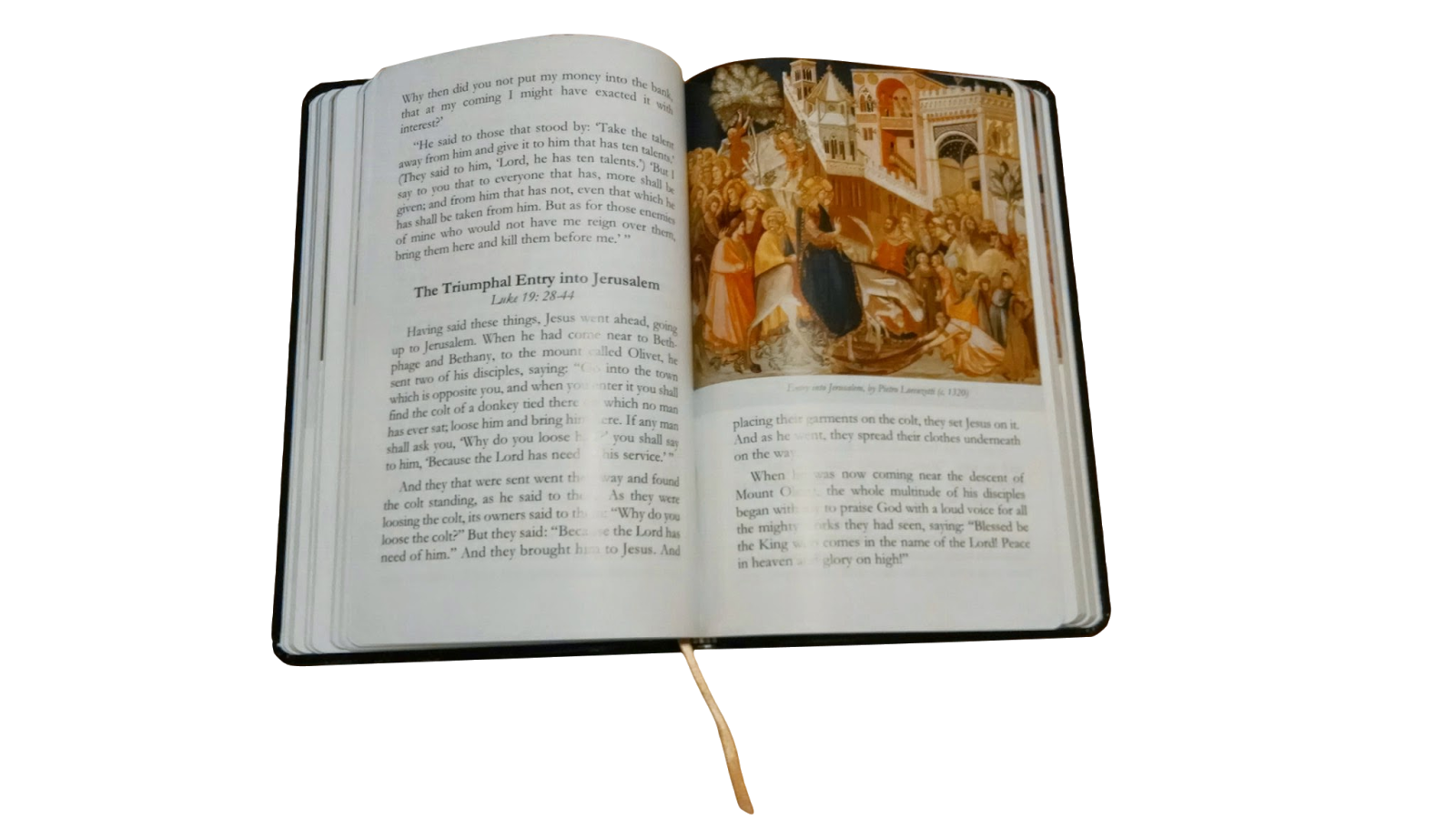 Posted by Will Bloomfield at 5:45 PM