September 26 is the feast of Saints Cosmas and Damian; and today, September 27, is their feast day in the traditional calendar.

Fra Angelico painted a series of paintings depicting the life of Saints Cosmas and Damian. Here is how the National Gallery of Ireland, which houses the painting of the saints being burned at the stake, describes the paintings:

Cosmas and Damian were two physician brothers living in Asia Minor in the third century. They and their three younger brothers were Christians, and during Diocletian persecutions they were compelled to prove their loyalty to the traditional gods with a sacrifice. When they refused, Lycias, the Roman Consul, submitted them to a series of brutal tortures. Miraculously they survived the torments but, finally, the enraged Consul has them all beheaded.

The episode represented here is the fruitless attempt to burn the five brothers. A circle of flames surrounds them, but the fire turns against the torturers, under the incredulous eyes of Lycias and his dignitaries.

This small panel was part of the predella (lower register) of Fra Angelico's most important altarpiece. Other parts of it are scattered in various galleries worldwide. The altarpiece was painted for the church of San Marco in Florence, and was commissioned by Cosimo de' Medici - whose name is echoed in the profession of Sts Cosmas and Damian (‘medici’ means 'physicians' in Italian).

Fra Angelico is one of the great Florentine Renaissance masters. In 1407 he entered the Dominican monastery of Fiesole, assuming the name of Fra Giovanni. Within a few years he had become the most acclaimed monastic painter in Italy.

The altarpiece is known as the San Marco altarpiece, as it was painted for the Convent of San Marco in Florence. Here is the main panel, depicting the Virgin and Child surrounded by the angels and saints, with Cosmas and Damian kneeling in front.

Originally, below the main panel were nine smaller panels depicting the lives of Saints Cosmas and Damian. Sadly, just as Duccio's great Maesta (featured in my previous post) was divided and scattered to various collections, so were the predella scenes from the San Marco altarpiece. I am unsure what the actual order of the scenes would have been, so I've arranged the below nine panels chronologically as best I could. The first images are of several miracles by the saints. Here is the healing of Justinian.

Here is the healing of Palladia.

Here are the saints before the Roman Consul Lycias.

Here they are surviving be burned at the stake (this is the image found at the National Gallery of Ireland). As you can see, the flames have left the saints unmolested and are actually fanning out towards their torturers.

Here they are crucified and stoned.

Here they are salvaged from death by drowning.

Finally, the saints were beheaded--and this achieved the desired end of death. (This painting is found at the Louvre in France.)

And here they are being buried.

The ninth predella panel was placed in the middle, under the main image. Here it is.

Lastly, as promised above, here is the abridgment from Butler's regarding the saints:

STS. COSMAS and DAMIAN were brothers, and born in Arabia, but studied the sciences in Syria, and became eminent for their skill in physic. Being Christians, and full of that holy temper of charity in which the spirit of our divine religion consists, they practised their profession with great application and wonderful success, but never took any fee. They were loved and respected by the people on account of the good offices received from their charity, and for their zeal for the Christian faith, which they took every opportunity to propagate. When the persecution of Diocletian began to rage, it was impossible for persons of so distinguished a character to lie concealed. They were therefore apprehended by the order of Lysias, Governor of Cilicia, and after various torments were bound hand and foot and thrown into the sea.

Reflection.—We may sanctify our labor or industry, if actuated by the motive of charity toward others, even whilst we fulfil the obligation we owe to ourselves and our families of procuring an honest and necessary subsistence, which of itself is no less noble a virtue, if founded in motives equally pure and perfect.

Posted by Will Bloomfield at 9:36 AM

Duccio, the Master of Siena

One of my greatest delights in producing the Sacred Art Series has been my re-discovery of the works of Fra Angelico and Giotto, and my discovery of the great Sienese artist, Duccio. That I am only discovering Duccio now is a tragedy, and bespeaks the ignorance that so many of us have regarding art. Hence, one of the goals of the Sacred Art Series is to expose young Christians to the works of these master artists.

In future posts, I will address Fra Angelico, Giotto, and others, but let us begin with Duccio.

Duccio's masterpiece is the Maesta (c. 1311), which Duccio designed as an altar piece for the marvelous cathedral in Siena, shown below. 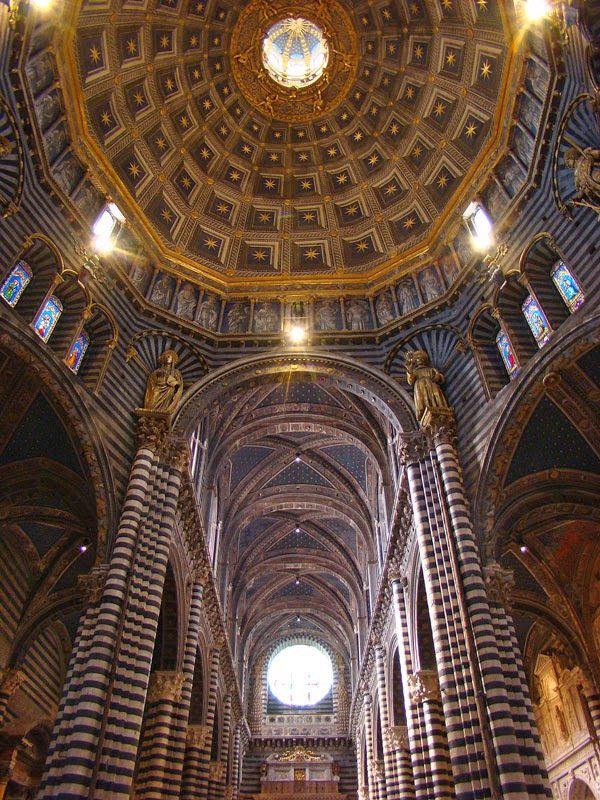 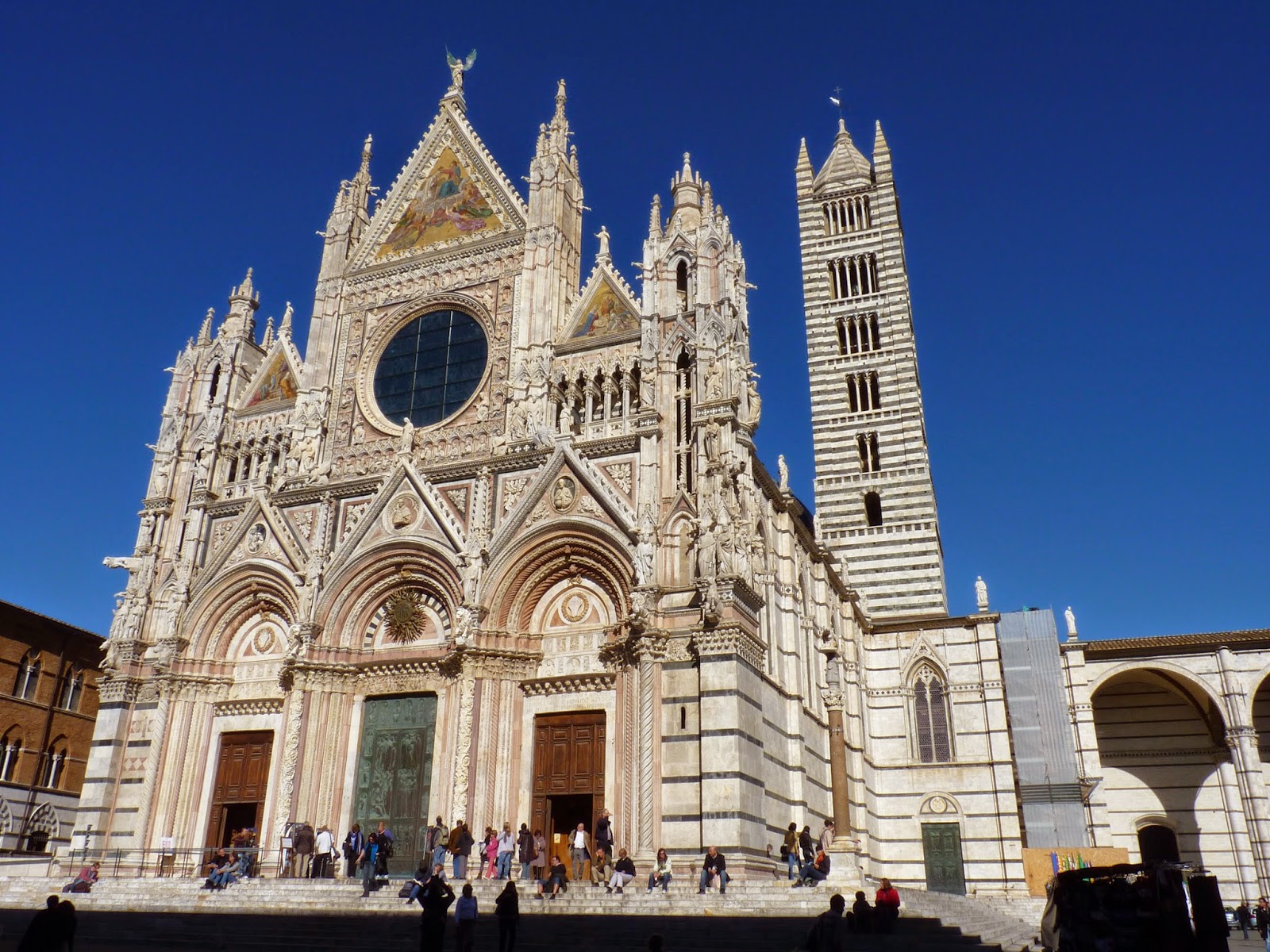 Sadly, the Maesta no longer remains as a single piece; individual parts of the painting have been cut up and scattered to various collections around the world. But some clever folks have created their own digital reproduction of how it likely looked.

The front shows Mary and the Christ child, with scenes from the life of Mary at the bottom. 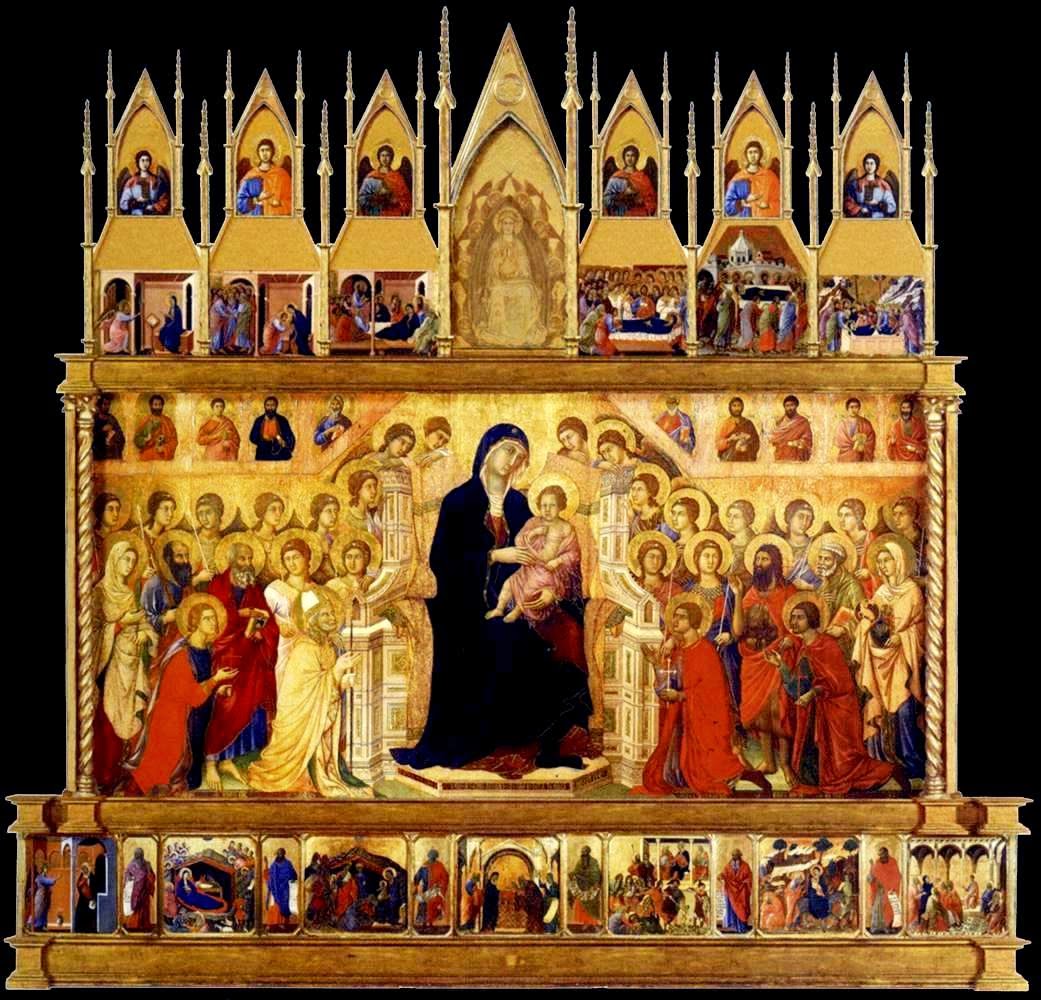 The back shows the life of Christ, with many images showing His Passion, and with the central image being the Crucifixion. Many of these excellent scenes from the Maesta are included in my forthcoming Sacred Art Series publication, The Holy Gospels of Luke and John. 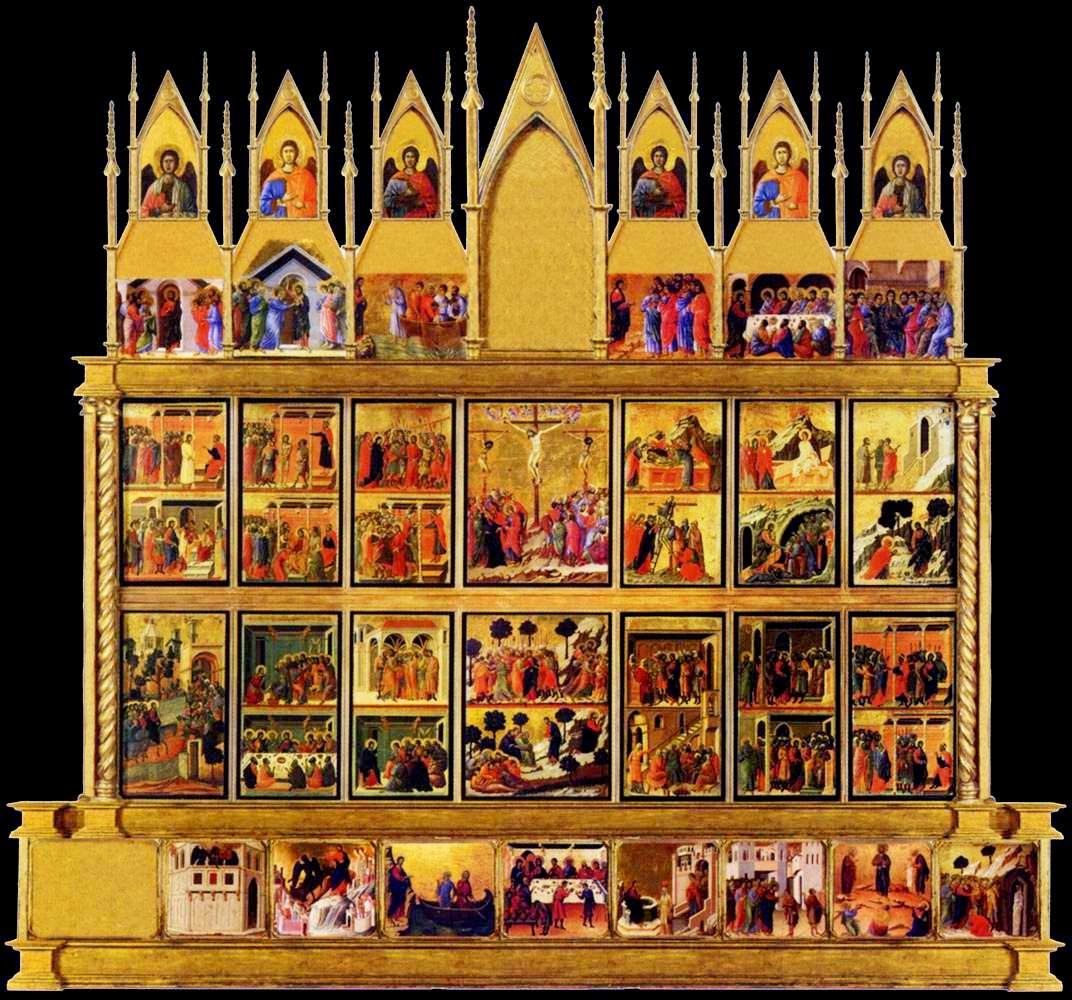 My brother-in-law John Joy was so impressed by Duccio's Maesta that he produced his own book based solely on the work of Duccio, and supplemented with the Gospel passages that support each image. It's available from Amazon here.

For those interested in learning more about Duccio, here are videos from the Khan Academy's excellent  "Smart History" series. These two are regarding the Maesta. Other Duccio videos are available here.

Here's what Wikipedia says on Duccio; and on the Maesta.

And here are the paintings of Duccio available through wikiart.org.
Posted by Will Bloomfield at 6:53 PM

The Sacred Art Series Rosary Book is now available through Amazon.com. The Rosary Book comes in two sizes: 8" x 10" and 4" x 5". The 8x10 is designed for praying the rosary with the family; the 4x5 for individual use. In the picture below, the 8x10 is on the left. The 4x5 is on the right.
The Sacred Art Series Rosary Book makes a great present for birthdays, feast days, first communions, confirmations, or for Christmas, Easter, Father's Day, or Mother's Day.
More details are available at www.sacredartseries.com. 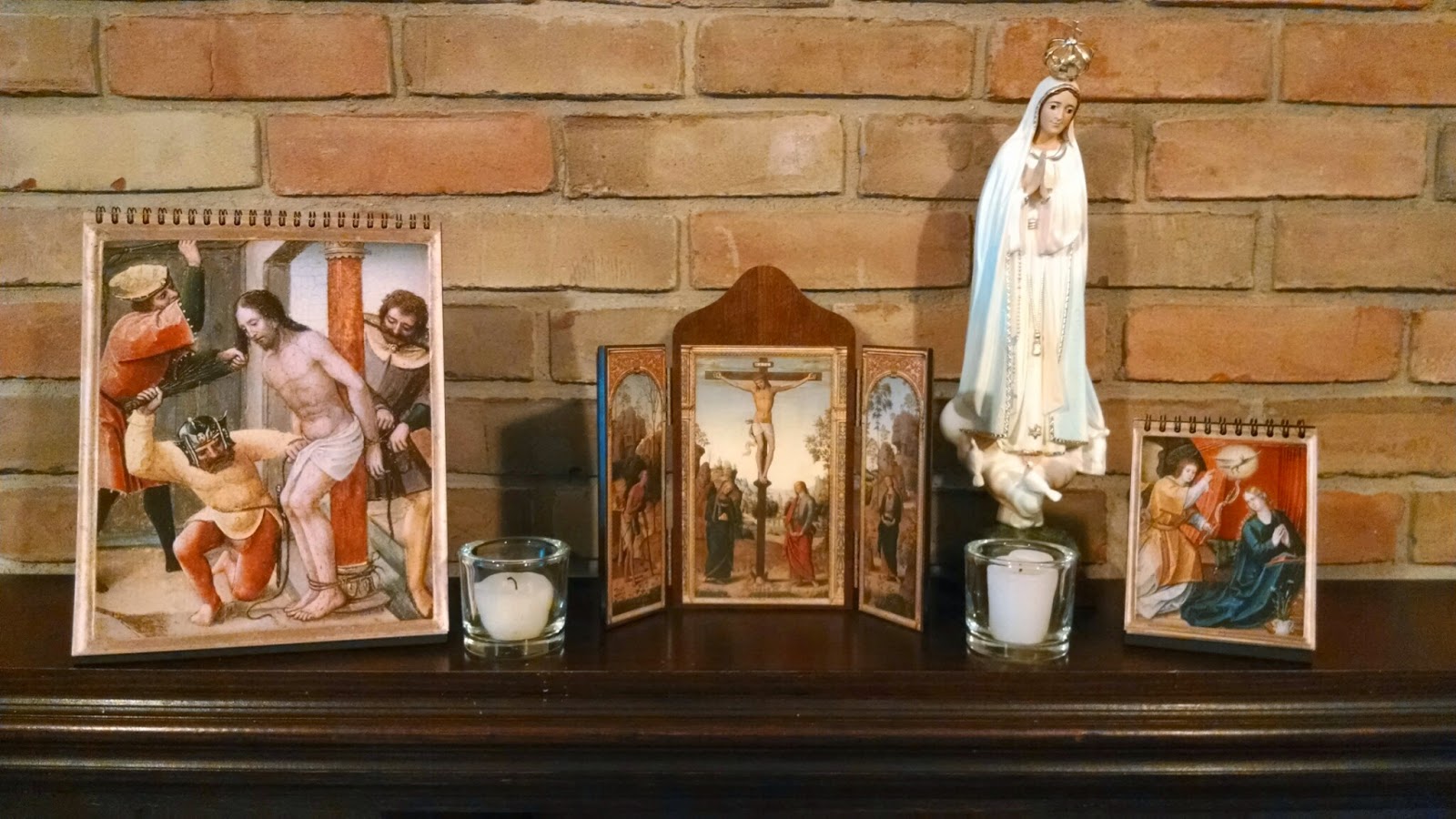 Posted by Will Bloomfield at 9:14 PM