Use discount code LUMINOUS for 15% off one or 25% off three items or more from the Sacred Art Series. (To get the discount, be sure to buy all items from seller Bloomfield Books.) The Amazon product pages for all Sacred Art Series items are linked at www.SacredArtSeries.com. 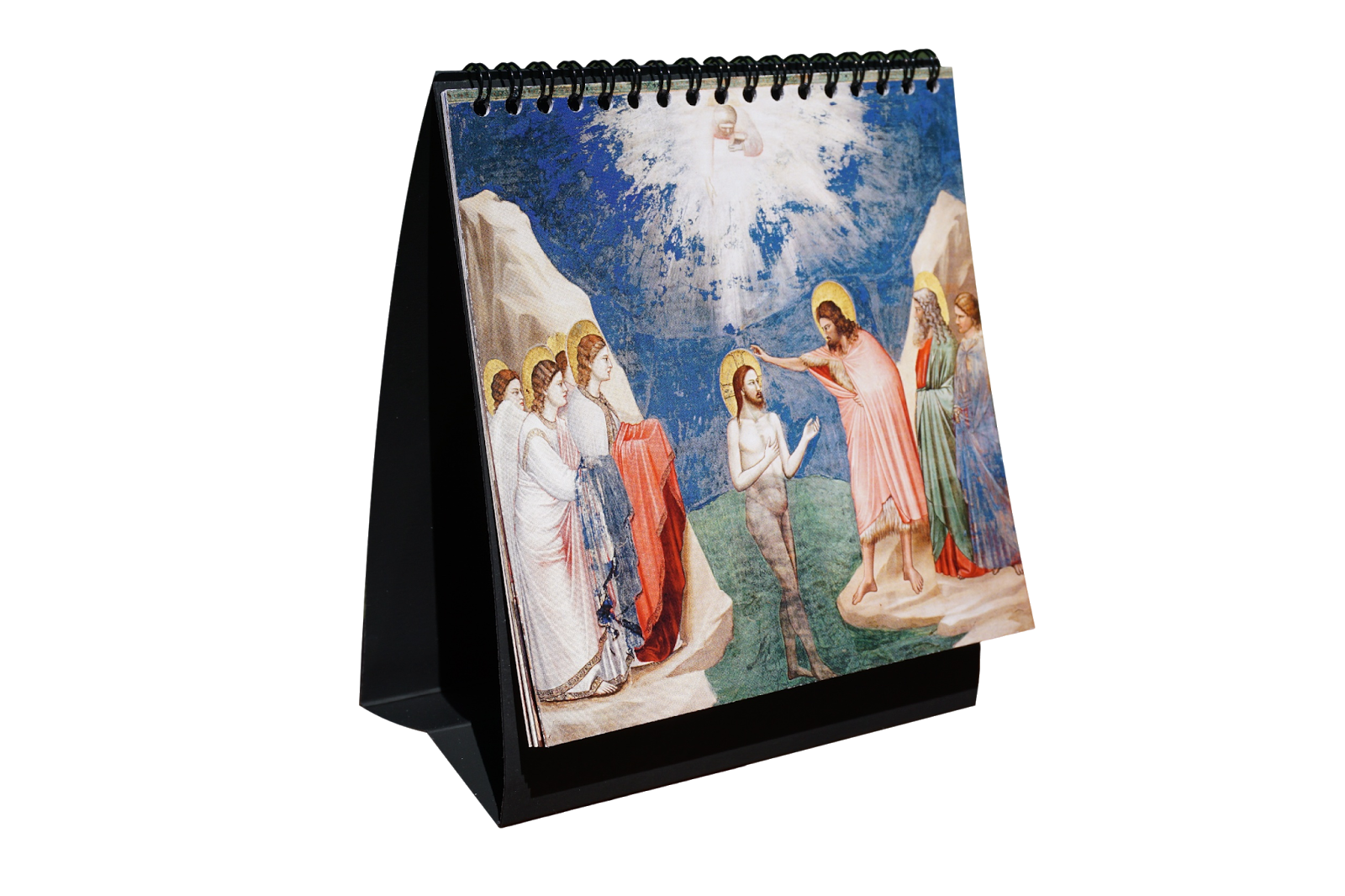 Posted by Will Bloomfield at 9:02 PM

Get yours today by entering discount code FIRSTCMN when checking out at Amazon. (Be sure to select "See All Buying Options" and select seller Bloomfield Books; then enter the code at checkout.) 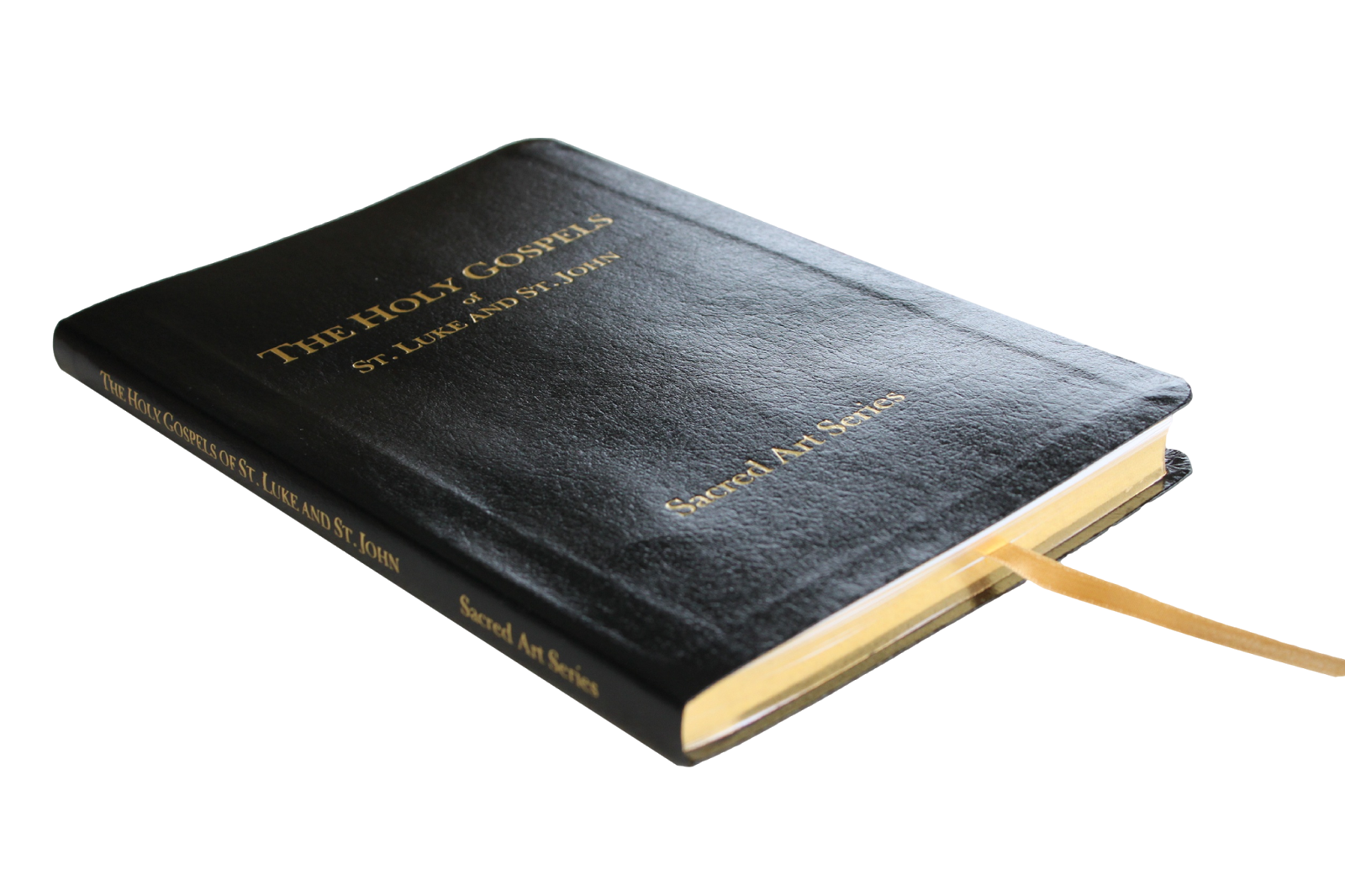 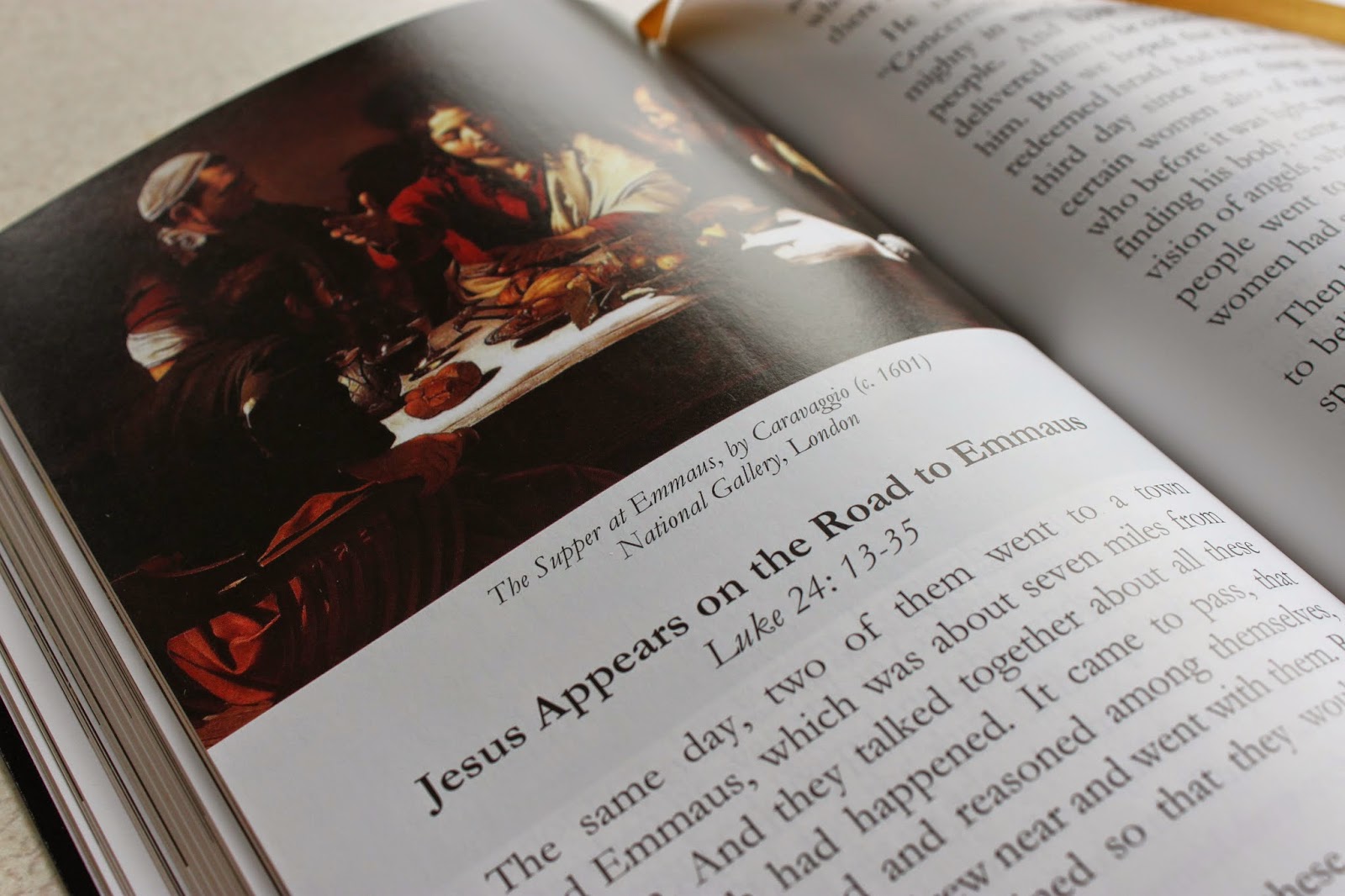 Posted by Will Bloomfield at 1:39 PM

The Rosary Flip Book includes images of the fifteen traditional mysteries of the Rosary: the Joyful, Sorrowful, and Glorious Mysteries.

I'm excited to announce that the Luminous Mysteries Rosary Flip Book will soon be available for purchase. It will feature the five Luminous Mysteries, which are the Baptism in the Jordan, the Wedding Feast at Cana, the Proclamation of the Kingdom, the Transfiguration, and the Institution of the Eucharist. The artwork is from Giotto and Fra Angelico. This flip book will be 6" x 6". 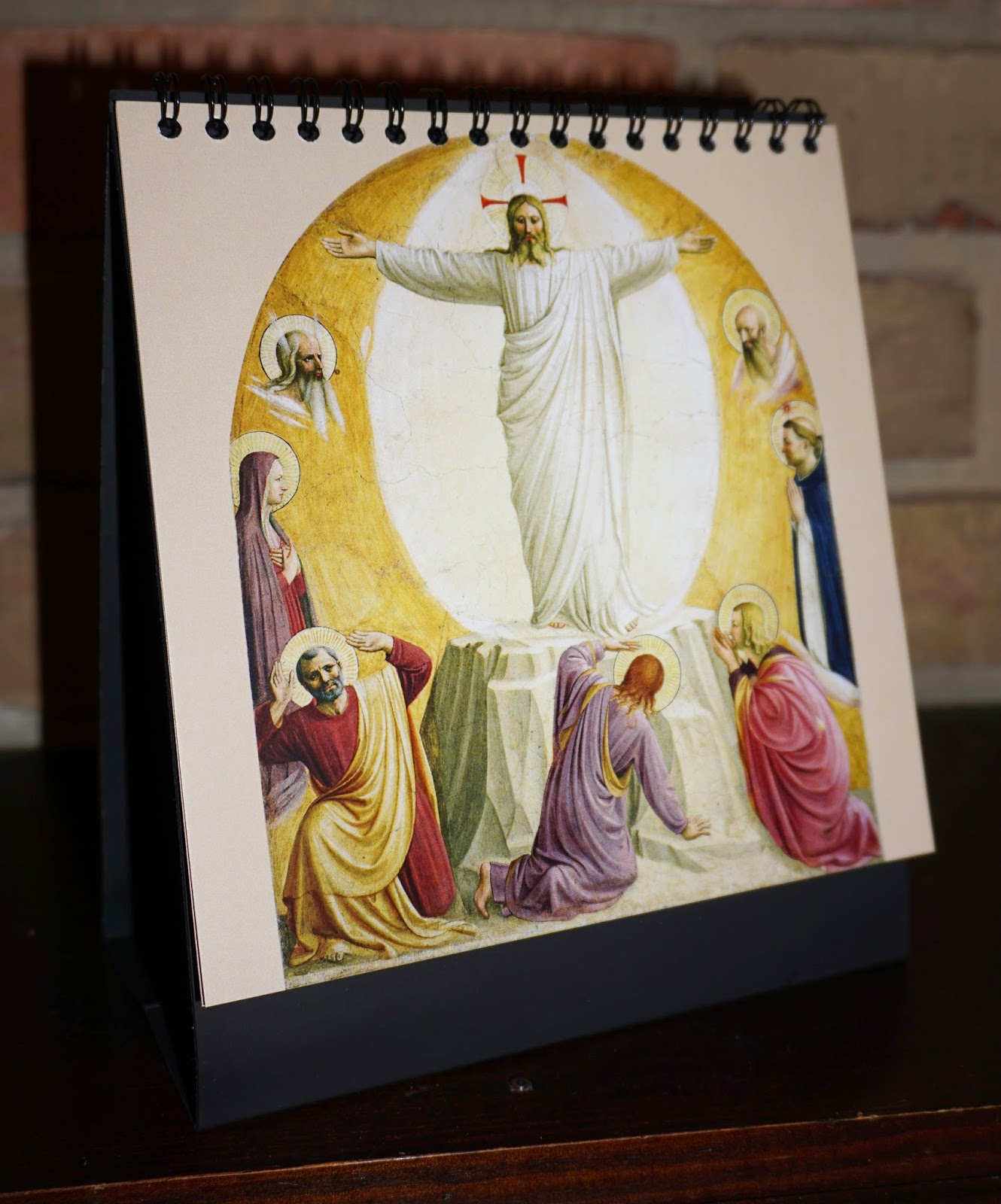 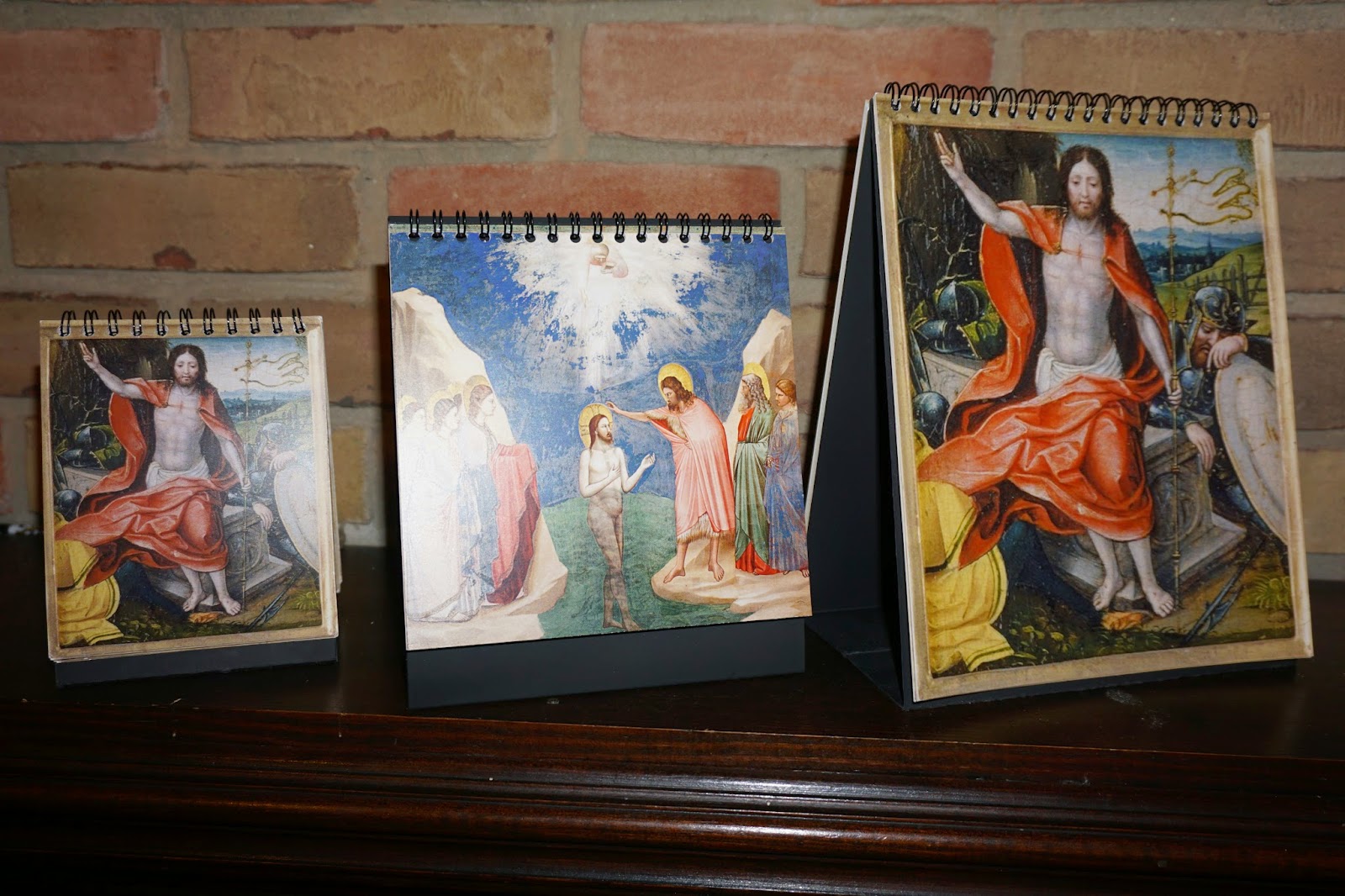 Posted by Will Bloomfield at 8:14 PM

Here is Eugene Bernand's wonderful painting of Peter and John running to the tomb on Easter morning. 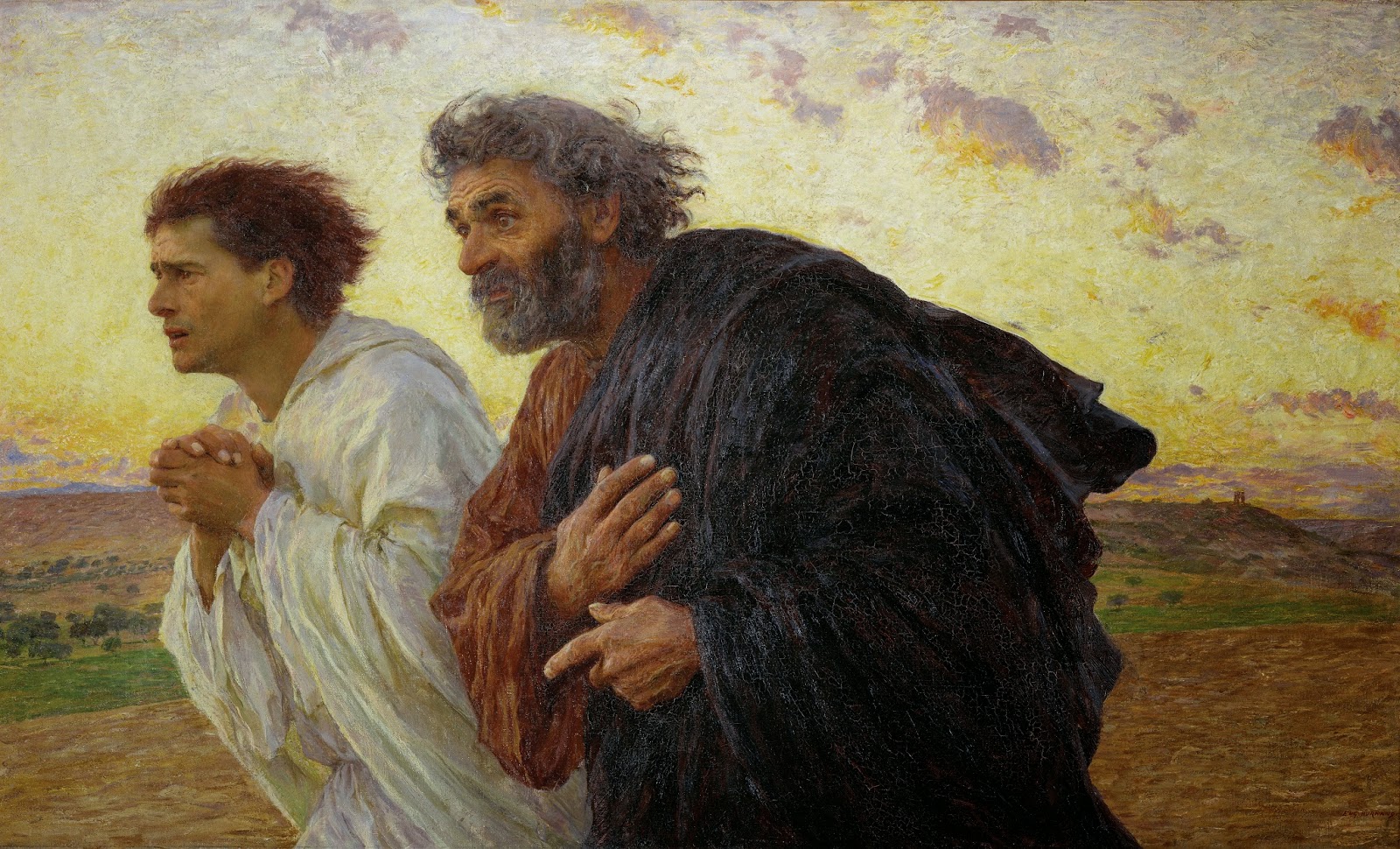 And here is the Gregorian Chant Introit for today's Mass.


Posted by Will Bloomfield at 8:01 AM

Holy Saturday - The Descent into Hell

Here is Duccio's painting of Christ's Descent into Hell. Below it is an eloquent description of this event. It comes from an ancient homily that is presented each year on Holy Saturday as part of the Church's Office of Readings. (Hat tip: Universalis.com) Rise, let us leave this place. The enemy led you out of the earthly paradise. I will not restore you to that paradise, but I will enthrone you in heaven. I forbade you the tree that was only a symbol of life, but see, I who am life itself am now one with you. I appointed cherubim to guard you as slaves are guarded, but now I make them worship you as God. The throne formed by cherubim awaits you, its bearers swift and eager. The bridal chamber is adorned, the banquet is ready, the eternal dwelling places are prepared, the treasure houses of all good things lie open. The kingdom of heaven has been prepared for you from all eternity.
Posted by Will Bloomfield at 8:06 AM

There are so many great pieces of art that depict Holy Thursday. A favorite of mine is Fra Angelico's Institution of the Eucharist. 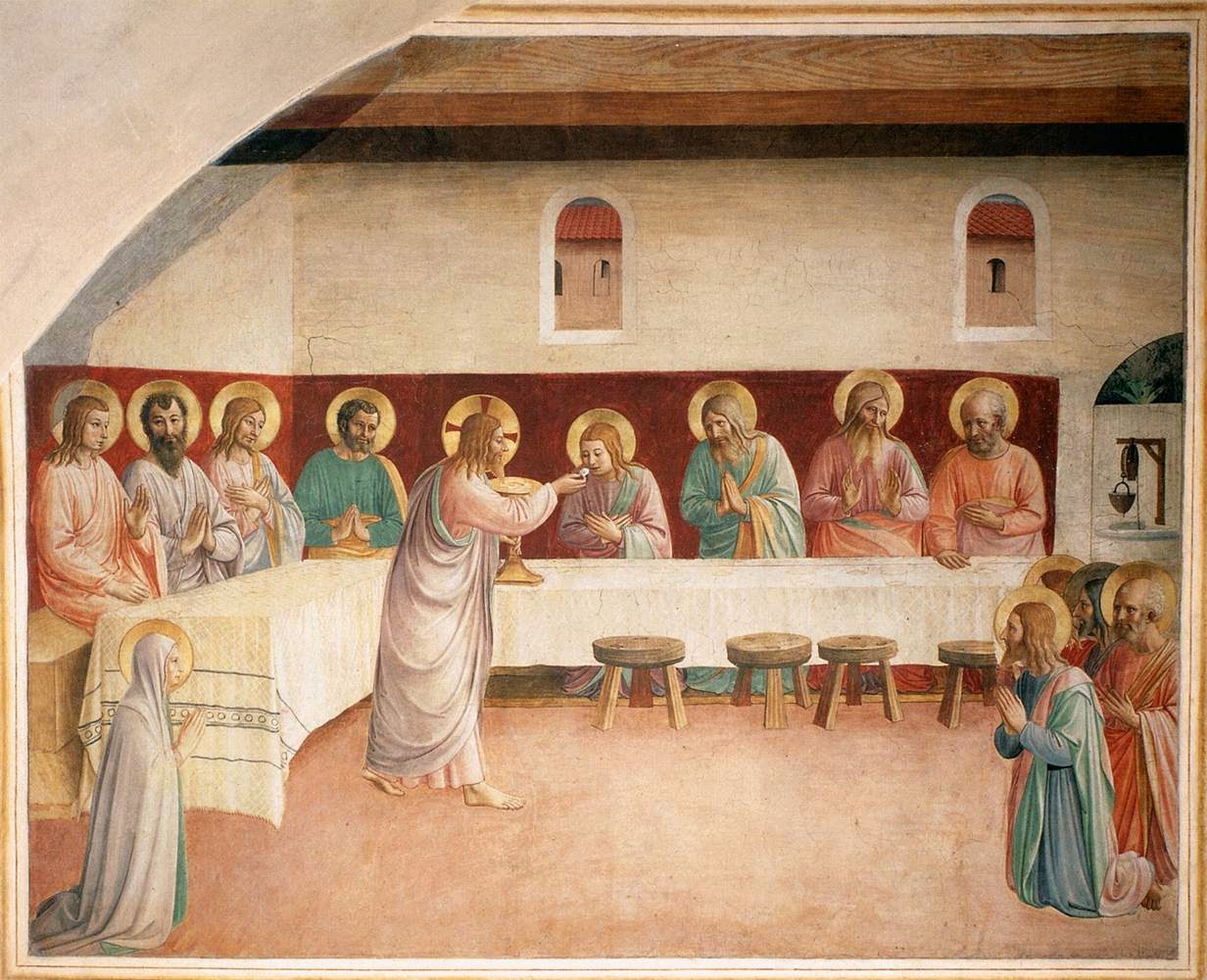 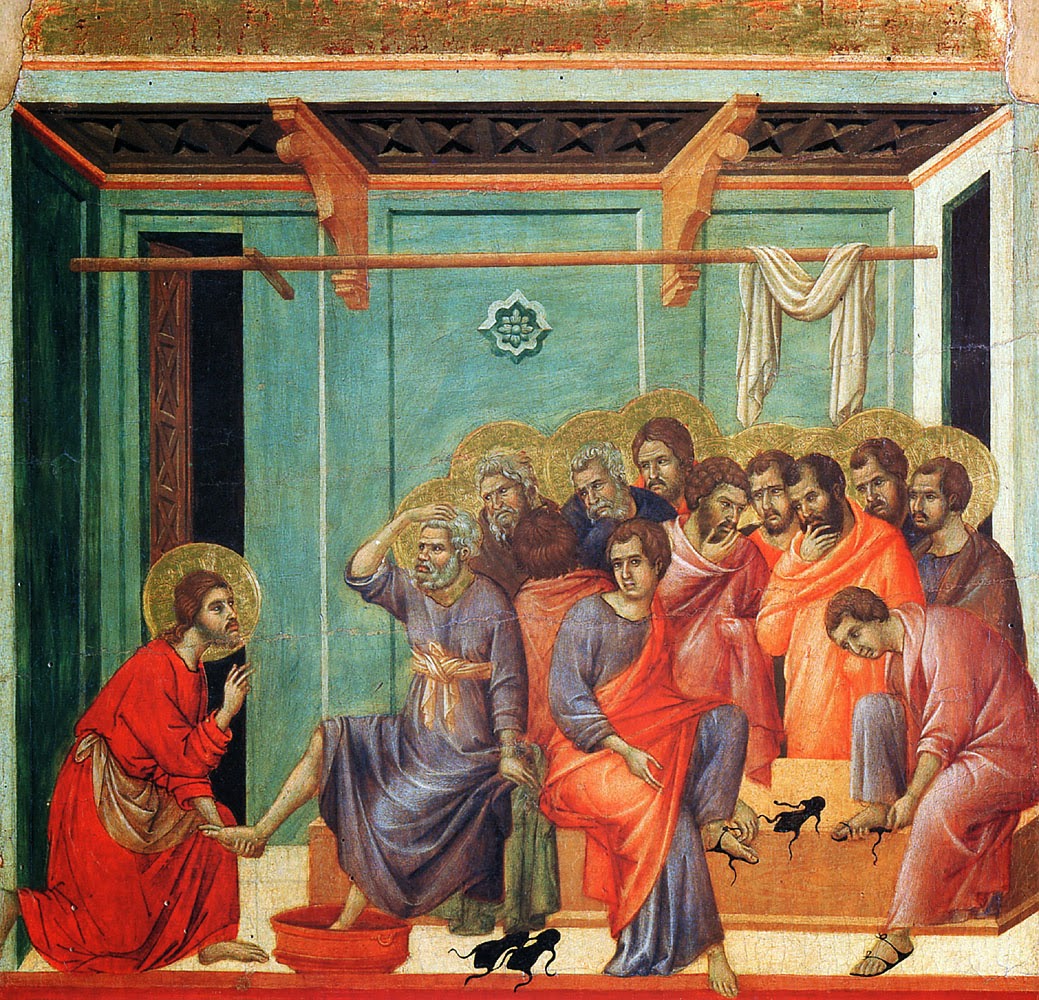 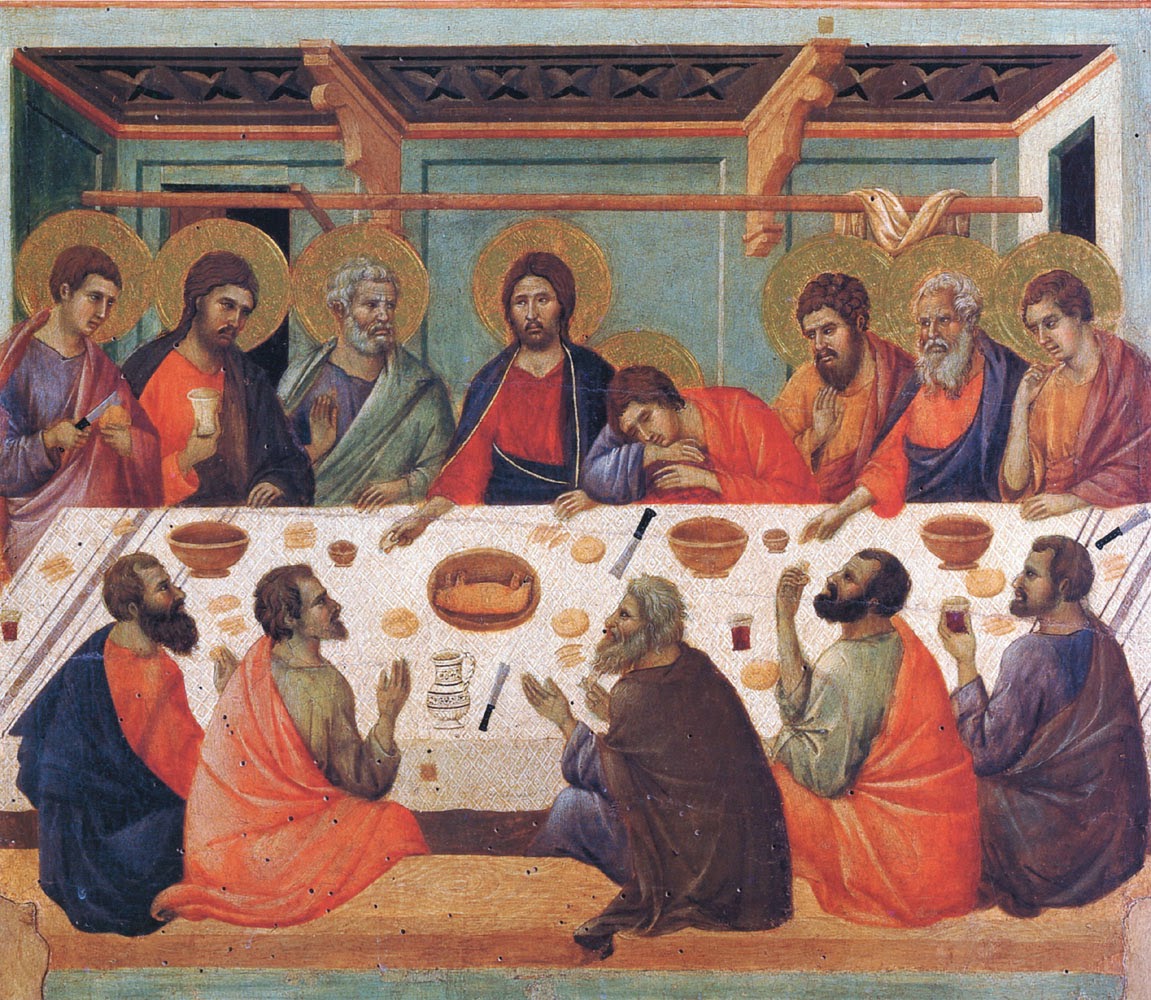 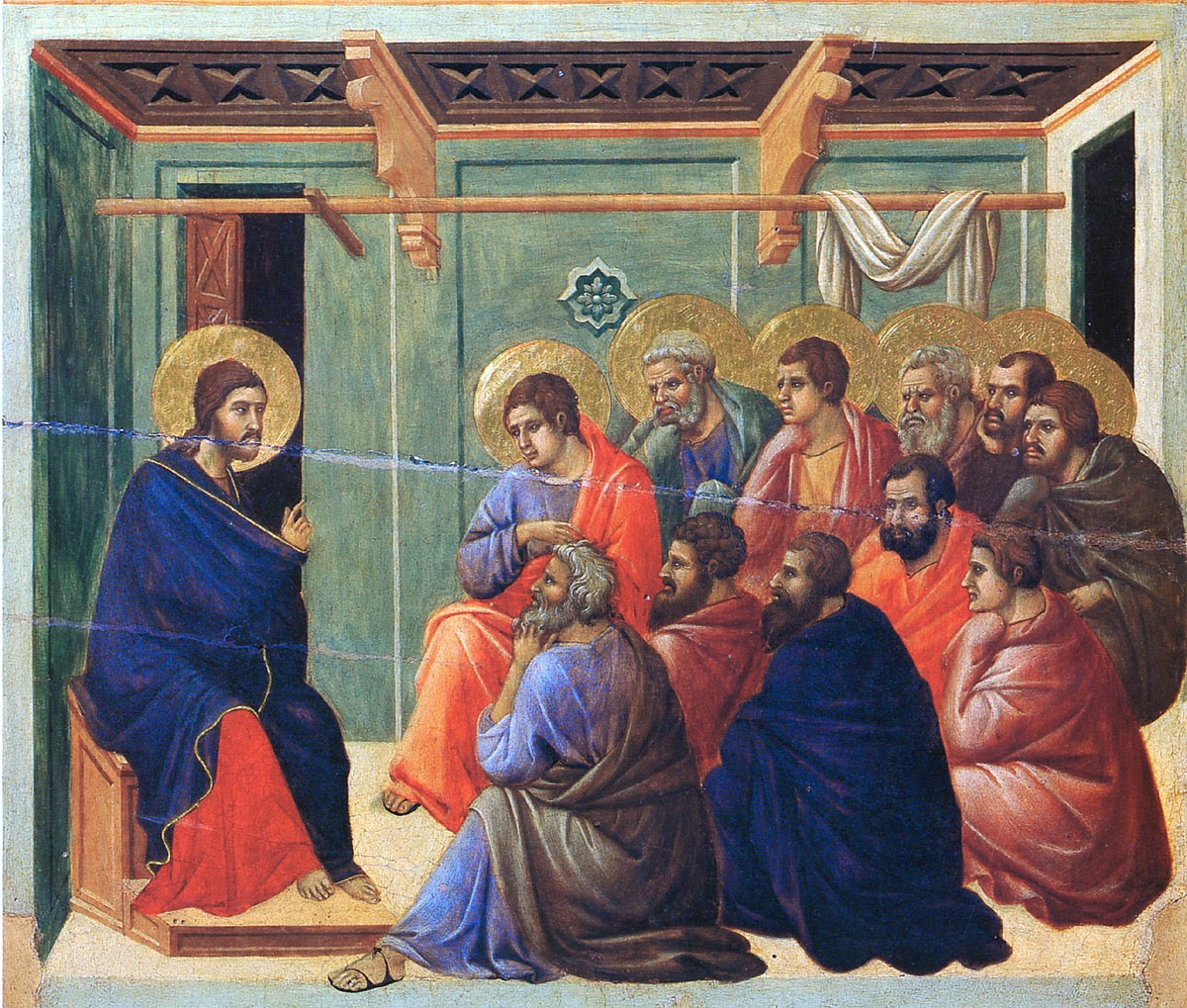 Notice below how Duccio incorporates two scenes into this one artwork: (1) Christ in prayer on the right, and (2) Christ returning to his sleepy Apostles. 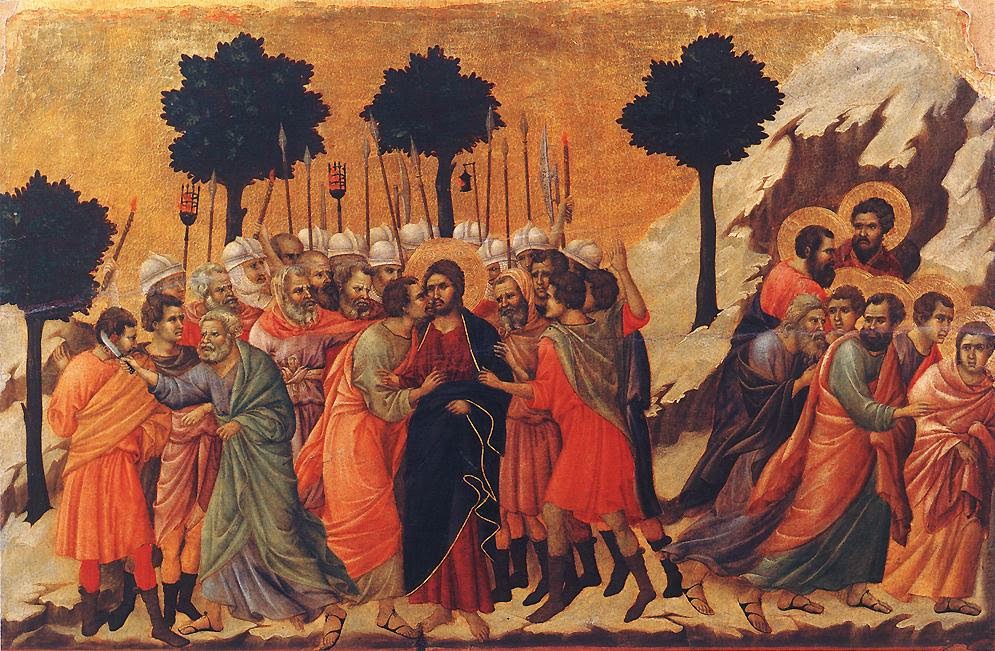 Giotto's depiction of Christ's arrest is also too good to omit. Posted by Will Bloomfield at 6:25 PM